The Most Popular Coffee Shop Drinks from Around the World.

Most popular coffee shop drinks throughout the world:

As you may have been able to decipher from its name, the coffee drink is known as the Americano originally came from the European country of Italy.

With the drink’s incredible popularity, being found in nearly every corner of the world, the Americano has a very interesting and odd origin story. The origin of the Americano traces back to the late years of World War Two when American G.I.s found themselves in Italy after pushing back Italian and Nazi forces.

It is believed that the drink came to be when these American G.I.s would dilute their espresso with hot water to create a drink that more closely resembled what they were used to.

As a result, Italian coffee shops began offering a drink known as the Americano to better serve these American G.I.s, with the name obviously being a reference to the Italian word for American.

Thus, the Americano drink was born!

Now, more than 70 years after its birth, the Americano lives on being available in nearly every coffee shop across the globe.

If you are going to open a coffee shop, not offering an Americano could be a grave mistake!

Learn more about the coffee beans YOU MUST have HERE!

This drink, which is particularly popular in Western Europe, is a French drink consisting of hot coffee and scalded milk

Interestingly enough, a traditional café au lait is prepared and served in a bowl instead of a cup.

Most commonly, a bowl with a wider mouth is used to facilitate preparation and cool the drink down faster, making it ready for consumption.

Although this drink had been made in French homes for decades, possibly even centuries before it appeared in any coffee shop setting, it is believed that the drink first made an appearance in a coffee shop in Vienna, Italy!

Since its creation, the drink has become fairly throughout Europe and has even made a slight appearance in the United States!

The drink originated from the Basque country of Spain and after it gained popularity, it began to spread to the Galicia region of Northern Portugal and even to what was at the time the Spanish colony of Cuba.

Since then, the drink has become a staple of the Spanish coffee industry, becoming incredibly popular throughout the region.

The cortado is an espresso-based coffee drink that is mixed with hot milk but isn’t frothed nor scalded, giving it a milky finish without the thick creamy texture that comes with most other milk-based coffee drinks.

All in all, the cortado is a drink that not too many different people who aren’t from Spain have tried, but is absolutely one that everyone should if they ever have the chance!

Lattes have become a staple in the coffee industry with nearly everyone trying one at one point or another.

Lattes are so popular that if you listen to any movie with a scene that takes place in a coffee shop, I can almost guarantee that you will hear someone order a latte! Despite its incredible popularity, lattes have not been around as long as some of the other drinks on our list.

The latte was invented in Italy in the 1950s by a man named Lino Meiorien and became popular in Seattle, Washington in the 1980s.

Since its popularity in Seattle, Washington in the 1980s, the latte has become a staple throughout the rest of the United States in nearly every coffee shop you could walk into.

Despite its incredible popularity, the latte is not a very complicated drink to make.

The drink is simply made by taking espresso and mixing it with steamed milk and adding a dash of froth on the top!

After you have a latte, you can make a large number of different flavored drinks, which is part of the reason it is so incredibly popular throughout the world.

Yet another famous coffee shop drink hailing from the great country of Italy is a drink formally known as the macchiato.

In Italian, the name macchiato means “stained” or “marked”, which refers to the way the drink looks when milk is added.

The drink is made by simply taking an Italian bold espresso and adding a splash of steamed milk or froth.

The drink exploded in popularity in the late 1990s when the famous coffee chain Starbucks began offering different flavored versions of the macchiato such as the caramel macchiato.

Since then, the macchiato has become one of the most common coffee drinks throughout the world.

Also known as the mochaccino, this drink originates in Mocha, Yemen, which is also where the drink gets its name from.

The cafe mocha is a latte made with chocolate flavoring mixed in as well layered on top. The drink is very common throughout the Middle East, but can also be found quite regularly throughout Europe and North America.

The drink also has a great number of variations, one of which is known as the white mocha.

It just so happens that the white mocha is the favorite drink of famous pop artist Miley Cyrus!

The cafe mocha is a fantastic coffee drink that your local coffee shop may not offer, so if you get a chance to try one, I would absolutely recommend you take the chance!

Where is the best place to open a coffee shop?

Coffee shops are abundant throughout the world available in nearly every corner of the globe.

Some places, however, drink and sell more coffee than others, so it can be important to understand if the area you are looking to move into has a good coffee market.

As a base list to help you get started, here are some of the best places to open a coffee shop throughout the world:

Finland is known for quite a few things: socialized medicine, a fantastic standard of living, and incredibly snowy winters, but the thing that they should be most known for is coffee consumption.

Consuming the most amount of coffee in any country throughout the world.

It is estimated that the average Finish citizen will consume 12 kilograms of coffee over the next year.

Because of the sheer amount of coffee that Finnish citizens consume, starting a coffee shop here is an opportunity you truly can not pass up.

Despite only having a population of about 5.238 million people, the European country drinks the second most amount of coffee in the world

In this year alone, Norway is expected to consume 8.3 kilograms of coffee per capita.

Long story short, if you are looking to start a coffee shop anywhere throughout the world, you simply can not go wrong with Norway.

Yet another Nordic country, Iceland is the next country on our list of the best places to open a coffee shop.

If you haven’t caught on by now, our main criteria are the amount of coffee that country consumes.

Well since we aren’t planning on breaking our trend anytime soon, the next country on our list, Iceland, also happens to consume the third most amount of coffee in the world.

The average Icelandic citizen consumes an incredible 9 kilograms of coffee per year.

While it may not be as much as the first two countries on our list, it is certainly nothing to laugh at and definitely carves a spot out for itself as one of the best countries to open a coffee shop in.

What are the most profitable coffee shop items to offer?

When operating a coffee shop, some items are going to bring in more money than others.

Cakes can be sold at a fairly high rate and are usually pretty simple to make.

They also pair well with coffee, making them a fantastic option to offer in a coffee shop and allowing you to increase your profits significantly. As we’ve explored on this list, there are plenty of different options for specialty drinks, but studies have shown time and time again, lattes are one of the most profitable coffee shop items out there.

Cookies are incredibly easy to make and can be sold individually with coffee and other products.

If you place items like cookies in a display window, they can be almost impossible to turn down, making them incredibly profitable.

Salads are a bit different than some of the options on this list, but they are still one of the best things you can offer in a coffee shop.

They can serve as a meal in themselves, giving people yet another reason to come into your shop, making them one of the most profitable items you can offer!

Smoothies are a fantastic option for those who wish to be particularly healthy in dietary decisions.

Offering smoothies, especially when in combination with salads, can be a fantastic way to attract a nontraditional crowd. 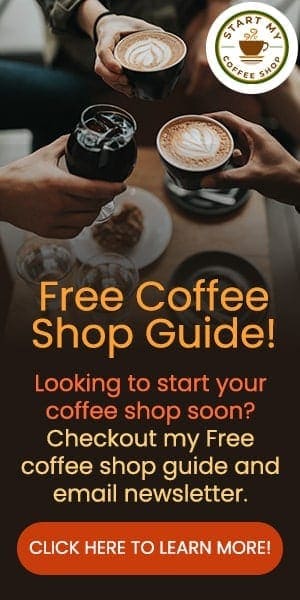